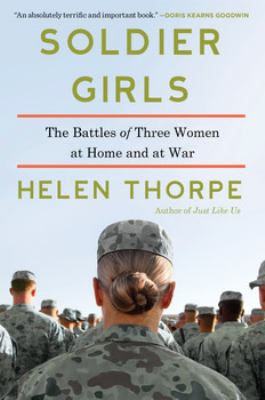 Summary/Review: A thoroughly touching look at the circumstances and lives of three women in Indiana who, for various reasons, have enlisted in the National Guard. A common thread is an attempt to utilize their service to further their secondary educations with the assistance of the GI Bill. The last thing any of them expect is to be sent to a war zone. But that is exactly what happens when the US becomes ensnared in Afghanistan and Iraq. We see the economic, emotional and family hardships exacted upon these women by prolonged absence from family and friends. We learn how difficult it is to be a woman in the almost-entirely male national guard and then in the US armed services overseas.

The three women are at different ages and points in their lives as they struggle (that’s the only word for their trials) to adapt, thrive and survive the day-to-day boredom, danger and stress of providing administrative, repair and support services, since they are banned from “combat” duties. They are, however, certainly in harm’s way every time they venture outside the US compounds where they work and live while on duty.

This is a look at women in vastly different economic and educational situations than most of us in southern Connecticut experience and certainly enlightens us about the real people behind the headlines and media coverage which barely touches on the human cost of repetitive and prolonged deployments experienced by the citizen-soldiers in the US National Guard services. You will enjoy the time you spend learning about the lives of these three women.

Who will like this book?: Someone looking for a new perspective on war and deployment.

If you like this, try this: Helen Thorpe has written only one other book, “Just Like Us: The True Story of Four Mexican Girls Coming of Age in America”, but be on the lookout for more from this author. If you are looking for books about war and deployment, try “Undaunted: The Real Story of America’s Servicewomen in Today’s Military” which offers another take on women in the military, or “Fives and Twenty-Fives” by Michael Pitre.

If you think this is a book you’d like to read, visit the Fairfield Public Library catalog to see if it’s available and/or to place a hold

Title: Island Beneath the Sea

Summary: Island Beneath the Sea follows a young woman named Zarité thrown into slavery in 18th century Haiti. Known by most as Tété, she is chosen to become housekeeper for Toulouse Valmorain, an unpredictable plantation entrepreneur and his wife, Eugenia, a woman slowly being dissolved into madness by the harsh living conditions and constant threat of political uprisings. The story follows Tété, who is likeable and sweet, but also conflicted and strong, as she struggles to become a free woman while desperately trying to keep her family intact and protect all those who have helped her.

Staying true to her roots, Allende creates an emotional story of romance, politics, and fantasy using an outstanding cast of characters. At times, the book can be a roller coaster- the defeats are particularly harsh and the accomplishments incredibly satisfying, reminding the reader that life is not always just. At approximately 500 pages, be prepared to devote at least a few weeks to the book. The characters -since their relationships are generally unconfirmed and many appear sporadically- take some time to get to know, but it is well worth the effort.

Who will like this book?  Those who like literature and character development- though not as tough as 100 Years of Solitude, a large number of characters come into play, and the book moves rather slowly at times (which is not a particularly bad thing!). Also, those who like reading about exotic places, history, and politics. Similar books would include Honolulu by Alan Brennert and Portrait in Sepia, also by Allende.

If you like this, try this: Honolulu by Alan Brennert, Portrait in Sepia by Isabel Allende, Hummingbird’s Daughter by Luis Alberto Urrea

Summary: Amandine is the first novel written by Marlena de Blasi, an author known for her memoir writing. The story is captivating and the author’s writing is simply beautiful, filled with sense details and unforgettable characters. Amandine is born out of wedlock into an aristocratic family in Krakow, Poland in 1931. She is born with a heart defect and not expected to survive. Under the pretext of bringing her to a hospital in Switzerland, Amandine’s  grandmother brings her to a remote convent in France. The Countess arranges to leave the child at the convent with a large sum of money and in the care of a governess, Solange Jouffroi. As a young child, Amandine is doted on by the nuns, Pere Philippe and Solange, but suffers cruelty and humiliation at the hands of the Abbess Mother Paul and the other children attending school at the convent. This cruelty, compounded by the abandonment by her mother, causes Amandine to believe there is something wrong with her. After a tragedy involving Amandine is barely averted, Solange takes her on a harrowing journey north through occupied France toward the governess’s home. Leaving their sheltered life in the convent, the pair discovers the horrors of war all around them. Meanwhile, Amandine’s birth mother, having just recently discovered that her child did not die at the hospital in Switzerland, has begun her own journey to find her. This is a story that will stay with you long after you’ve read it.

Summary: Set in the late 1800’s- early 1900’s, the book follows Teresita, a young girl in Mexico who has been abandoned by her poverty-stricken farm hand mother and given to her abusive aunt who can not afford to feed another child. Huila, an “ancient” religious medicine woman at the age of fifty, takes the child under her wing when she realizes that Teresita has also been given the gift of supernatural healing. Teresita soon discovers her true calling to take away the people’s suffering, and soon her life spirals out of control as word spreads all the way into North America about her abilities to heal the sick and wounded, as well as her outspoken liberal political views against the government and organized religion, which do not sit well with the already collapsing Conservative government and Roman Catholic church. This story follows Teresita until the age of twenty as she desperately tries to escape her destiny of martyrdom.

Beautifully written and rich in detail, Urrea makes this a quick 500-page read. Impossible to put down, the story will stay with you long after you’ve finished- especially when you discover she is based on a real person related to Urrea. Disturbing, exciting, and beautiful all at the same time.

Who will like this book? Fans of magical realist authors (such as Gabriel Garcia Marquez and Salman Rushdie) who are looking for a bit more realism than magic. If you enjoyed Into the Beautiful North, be prepared for a much darker, deeper and more mature look into human psychology, organized religion, and politics. It is NOT for those with weak stomachs.

Title: The Evolution of Shadows

Summary:  After having his heart-broken, American photographer Gray Banick travels to Bosnia and into a war zone. Gray’s interpreter Emil, and his mentor Jack, often question Gray about the girl in the picture he carries with him. They know she is the reason he is here, but do not know the story behind his heartbreak. Her name is Lian Zhao and she and Gray were very much in love. Lian, however, wasn’t strong enough to face her parent’s disapproval of Gray so she chose to marry another man. Gray has traveled to Bosnia to kill her memory, or kill himself.  It is now almost 5 years since Gray disappeared, last seen by Emil in a Bosnian killing field. Lian, Emil, and Jack have met in Sarajevo to find out what happened to the man they all loved.

This debut novel brings to life the horrors of the Bosnian war and its aftermath. Smoothly fading from past to present and back again, the author tells the stories of Gray and Lian, Emil, Jack, and their families. This is a story of searching for lost loves and forgotten lives. Only when the search is over can the healing really begin. This is a fabulous story.

Who will like this book? Fans of literary fiction that can stand some descriptions of the horrors of war.

Summary: After all the buzz about this book I thought I would have liked it much more than I did. The writing was very good and the descriptions of the jungle travel are very vivid, but the story was a bit too slow paced for me. I think it could be that I just didn’t care much for the main character. Although I didn’t personally like this book, it was very well written and I’m sure it will appeal to many others.

Marika is a journalist who covers human interest stories in war torn countries. She has narrowly escaped death several times but continues to travel alone to these dangerous regions. When she hears the news that her idol, fellow journalist Robert Lewis, has committed suicide, she decides to write his biography. During her research she comes across a letter written by a missionary who claims to have seen Robert Lewis in the jungles of Papua New Guinea. Although she has settled down for the first time in her life while she writes Lewis’s biography, she cannot forget the letter and sets of to PNG to search for him. The novel follows Marika, called White Mary by the local people, through the jungle led by her guide Tobo, a witch doctor from a local village who does more to help Marika than just lead her on her quest. Tobo is by far my favorite character in this story.

Who will like this book?  Anyone who enjoys stories with strong characters and vivid descriptions about exotic, dangerous locations. Just remember to pack some bug spray, mosquito netting, and a big floppy hat because you’ll actually feel the bugs and the blistering sun while you’re reading.