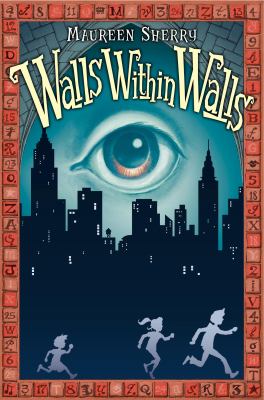 Summary/Review: CJ, Brid, and Patrick Smithfork (along with little sister Carron) don’t want to move from their cozy Brooklyn apartment to a sprawling penthouse in Manhattan.  But ever since their dad became a super-successful video game creator, it seems that their opinion matters less and less.  With their dad spending all his time at work and their mom spending all her time picking out décor for their new place, the Smithforks want nothing more than to just go home – their real home, in Brooklyn.  But when they find mysterious writing behind the wall, everything changes.  A mystery years in the making that won’t end until they’ve unraveled the clues hidden all over New York – and might end with a missing treasure…and a new idea of what “home” means.

This book doesn’t just have a typical Wizard of Oz “there’s no place like home” theme.  Instead, this is more of an underlying plot line which instead focuses on the beauty and history of New York City – complete with a study guide in the back which discusses what’s real and what’s fiction.  While the set up takes a while, the book’s pace picks up rapidly toward the second half, as the children focus on clues which incorporate history, literature, poetry, and more.  Although I was a little disappointed in how the librarian was represented, the author did a wonderful job of introducing late-elementary/early middle school readers to historical fiction.  It’s also a Nutmeg nominee for 2015, and is less heavy-hitting in the morality department than others, which could be a real plus.

Who will like this book?  A reader who wants to delve into the world of historical fiction.  Parents and children who are interested in mystery and suspense.

If you like this, try this:  There are tons of great mystery series available to children, some classic (Nancy Drew, Boxcar children) and some new (Mysterious Benedict Society, 39 Clues, All The Wrong Questions…).  If you’re looking for some more historical fiction, try Nathaniel Philbrick (who writes for adults, too!) and Richard Peck.  However, this book is unique in its history of New York architecture, literature, poetry, art, and everything else!

If this looks like a book you or your child would like to read, visit the Fairfield Public Library catalog to see if it’s available and/or place a hold! 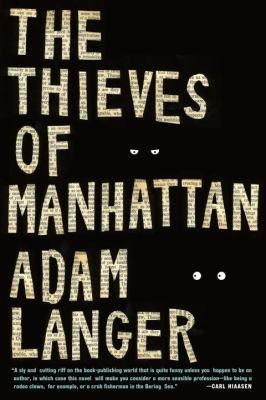 Title: The Thieves of Manhattan

Summary: Ian Minot is a struggling writer working at the Morningside Coffee diner. Ian works alongside Joseph, a struggling actor, and Faye, an aspiring artist. Of the three, Ian has been the least successful in his career. His Romanian girlfriend Anya, however, is very close to getting her collection of short stories published while Ian continues to get rejection letters. One of the most memorable of these comes from the literary agent Geoff Olden who simply wrote “good luck placing this and all future submissions elsewhere”.

When Faye draws Ian’s attention to a customer they have nicknamed The Confident Man, Ian is appalled to see that he is reading a copy of the recently published memoir “Blade by Blade”. In Ian’s opinion, the book is a “bogus piece of crap”. As it turns out, The Confident Man feels the same way about it. The Confident Man is Jed Roth, a former editor at a very respectable publishing house. Jed left his position at Merrill Books when his decision not to publish “Blade by Blade” was overruled by the owner of Merrill Books. Jed has devised a plan to bring down Merrill Books and agent Geoff Olden and recruits Ian to play a crucial role in his scheme. Ian agrees but soon finds himself in over his head and unsure who to trust.

This is a fun story, full of humor and intrigue, which takes a few shots at the publishing industry along the way. The last few pages contain a glossary of selected terms used throughout the book, all based on literary figures.

Who will like this book? Anyone looking for a fun read, especially those who like intrigue. Anyone familiar with the publishing industry.

Summary:  Carol Meitzner wakes with a feeling of dread. She knows in her heart that her 21 year old son, Jonas, is in trouble. She doesn’t know what kind of trouble or how much, but he has not been returning her calls. Carol soon learns that his girlfriend, Vic, has not seen or heard from him recently, either. Jonas’s father doesn’t think they should be so worried. Wrong. In 31 hours, their son Jonas and 6 others are planning to walk into key terminals of the NYC subway system and detonate explosive vests strapped to their bodies. Blond haired, white, and from a privileged background, Jonas is set to become the new face of terrorism.

Jonas’s radical mentor has disabled his phone to keep him completely isolated from the people who care about him the most. Throughout this gripping novel we meet some of the potential victims of this terrifying act, many of whom Jonas knows and loves. As we watch Jonas prepare for his martyrdom, without the fanaticism one would expect, it becomes clear that this could really happen. This possibility makes 31 Hours all the more chilling.

Who will like this book? Fans of  suspense novels.

Summary: I am not a reader of crime stories – but from now on I plan to make an exception for the works of Richard Price. His latest explores the ‘butterfly effect’ of a seemingly random  murder on the Lower East side, and turns a sharp, unflinching eye on the trendy hipsters and the urban poor that live there.

As you follow detectives on the trail of the killer, you meet characters you’ll not soon forget: The getting-too-old-for-this restaurant host simmering with resentment, the grieving father who in his desire to help only hinders police efforts, and a young street kid ground down by unwanted responsibilities.  Written with a gritty, pull-no-punches realism, this book is a haunting story of two worlds that co-exist, but rarely intertwine.

Who will like this book: People who like detective stories that are more about character than procedure. Fans of the HBO series The Wire.

If you like this, try this: Clockers by Richard Price. For a different take on Lower East Side bohemia, try the adventurous No Matter How Much You Promise to Cook or Pay the Rent You Blew it Cauze Bill Bailey ain’t Never Coming Home Again by Eduardo Vega Yunque.