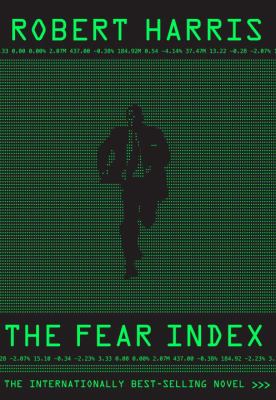 Summary/Review: If you like to read about the stock market,financial markets worldwide, and are concerned about the gyrations in the markets caused by computers using mathematical formulas for lightning fast trades (Remember the flash crash?) then this work of fiction is for you.

Dr. Alex Hoffmann, the main character, is a mathematical genius and is obsessed with artificial intelligence.  When he is unable to continue his work at CERN(due to a mental breakdown), he turned to the development of  a form of artificial intelligence, VIXAL, that utilizes a set of algorithms to buy and sell financial instruments based on what in reality is known as the VIX or volatility index, otherwise known as “the fear index”. The computers monitor events worldwide, and when the sense “fear” they will buy or sell — depending on the situation. Dr. Hoffmann and his hedge fund company become ultra-rich and everyone is very happy with the working of VIXAL–  until events start to go terribly wrong – starting with an intruder at Hoffmann’s home.

At the beginning of each chapter there is a quotation from Charles Darwin’s Origen of the Species– a work about evolution and natural selection.  At first you may not make the connection between the twists and turns of the plot and the quotation, but as you near the end of the book you realize WHAT has been evolving right under the nose of Dr. Hoffmann.

Who will like this?: Those who are interested in Artificial Intelligence and its impact on human life.  Those who are looking for a thriller with lots of twists and turns.

If you like this, try this:  If you liked Robert Harris’ writing, he has a number of other books such as “The Ghost” and “Lustrum”.   If the topic of Artificial Intelligence interests you, try the classic “2001: A Space Odyssey” by Arthur Clarke or “I, Robot” by Isaac Asimov.

If you are trying to break into the science fiction genre, try the classic “Ender’s Game” by Orson Scott Card or “Fahrenheit 451” by Ray Bradbury.  More recent science fiction includes the Hunger Games series by Suzanne Collins or “Insurgent” by Veronica Roth.

If this looks like a book you’d like to read, visit the Fairfield Public Library catalog to see if it’s available and to place a hold! 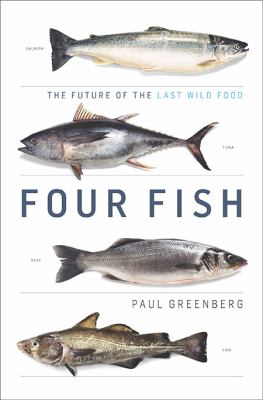 Title: Four Fish: The Future of the Last Wild Food

Summary: The title refers to four types of fish popular for consumption:  salmon, sea bass, cod, and tuna.  I found this  book to be very well-written and researched. The author did not cop a “wholier than thou” attitude about whether you should or should not eat fish and was very much aware that his attitude may not be shared.

He made some very interesting observations about fish and the ocean providing wild food (and fish as wildlife, much as wolves, elephants, dolphins and whales are now considered wildlife), and not just exploitable beings. One of the most thought-provoking themes was the farming of fish, the commercial breeding of fish to bring out specific characteristics for human consumption and production, and the “necessity” of maximizing the protein potential of the sea’s creatures for human nutrition since land-based animals produced for food are rapidly approaching their maximum land-based potential.

The author made very clear statements about the ocean ecology as a whole, not just as it applies to catching and eating fish. He also approaches all of his discussions with the attitude of someone who grew up fishing and enjoys fishing both for sport and the food it can produce.

Who will like this book? Foodies, conservationists and some sports-minded people.

Summary: Bertrand Russell, mathematician, philosopher, pacifist and lightning rod, was one of the most important thinkers of the twentieth century. This ambitious graphic biography focuses equally on his turbulent personal life and his groundbreaking work in the area of mathematical logic. We follow Russell as he discovers a paradox and works (and reworks) his theories. He teams with and is opposed by heavyweights of early twentieth-century philosophy,  including Wittgenstein and Godel, all the while searching for truth and remaining haunted by the madness he believes is constantly circling him.

Bertrand Russell affected – and was affected by – some of the most dramatic personalities and events of the twentieth century. While a graphic  novel about math and philosophy might not seem like the most enticing subject, in the hands of  these gifted writers and illustrators, Russell’s story comes to life in surprising and compelling ways.

If you like this, try this: For another unique take on philosophy, try The Book of Dead Philosophers by Simon Critchley. Professor Stewart’s Cabinet of Mathematical Curiosities by Ian Stewart. If you are as clueless about math and science as I am, check out 100 Most Important Science Ideas by Mark Henderson.

This is just one of John Medina’s interesting observations detailed in Brain Rules. Medina has narrowed his research down to 12 rules of brain function with a chapter designated for each.

In chapter 1, “Exercise Boosts Brain Power” we learn, among other things, that one of the greatest predictors of successful aging is the presence or lack of a sedentary lifestyle. I personally know a few people who could benefit by reading chapter 4, “We Don’t Pay Attention to Boring Things”. Chapters 7 and 8 detail the effects of sleep and stress on brain function, and Chapter 11 tells us (surprise, surprise), that male and female brains are different. If you are interested in learning why we think and behave the way we do, Medina does a great job explaining the “rules”.