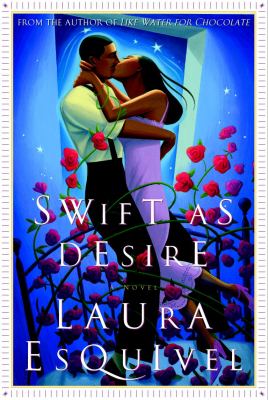 Summary: Swift as Desire focuses on Lluvia, a middle aged mother desperately trying to replay her entire life in order to understand her parents’ mutual anger for one another. Júbilo, her father, was born with an unmatched ability to communicate and understand through feeling rather than words, but is now confined to a bed and unable to speak due to Parkinson’s. Lluvia’s mother Lucha was a privileged beauty who gave up everything in order to marry Júbilo, but has now become cold and calculating. The story finds Lluvia desperate to understand her parents’ past and reconcile them before her father’s imminent death.

The story skips around in time, leaving the reader on edge throughout the entire book. The characters develop smoothly, and leave a deep impression. Nothing is as it seems with the family, which makes an unforgettable read. If readers are looking for another Like Water for Chocolate, they won’t find it here. Instead, they will find a brutally honest look into the closed doors of a marital relationship and a couple falling apart.

Who will like this book? Readers who are looking for a relatively short but still very engaging story. Those who are prepared to love and hate each and every character, sometimes at the same time, but still hope for a happy ending

If you liked this, try this: Like Water for Chocolate also by Esquivel

Summary: Set in the late 1800’s- early 1900’s, the book follows Teresita, a young girl in Mexico who has been abandoned by her poverty-stricken farm hand mother and given to her abusive aunt who can not afford to feed another child. Huila, an “ancient” religious medicine woman at the age of fifty, takes the child under her wing when she realizes that Teresita has also been given the gift of supernatural healing. Teresita soon discovers her true calling to take away the people’s suffering, and soon her life spirals out of control as word spreads all the way into North America about her abilities to heal the sick and wounded, as well as her outspoken liberal political views against the government and organized religion, which do not sit well with the already collapsing Conservative government and Roman Catholic church. This story follows Teresita until the age of twenty as she desperately tries to escape her destiny of martyrdom.

Beautifully written and rich in detail, Urrea makes this a quick 500-page read. Impossible to put down, the story will stay with you long after you’ve finished- especially when you discover she is based on a real person related to Urrea. Disturbing, exciting, and beautiful all at the same time.

Who will like this book? Fans of magical realist authors (such as Gabriel Garcia Marquez and Salman Rushdie) who are looking for a bit more realism than magic. If you enjoyed Into the Beautiful North, be prepared for a much darker, deeper and more mature look into human psychology, organized religion, and politics. It is NOT for those with weak stomachs.

Title: Into the Beautiful North

Publisher: Little, Brown and Company, May 2009

Summary: This book was deliciously lyrical and why would you expect anything less than this from the author of the widely acclaimed novel The Hummingbird’s Daughter and 2005 Pulitzer Prize finalist for nonfiction for The Devil’s Highway. Mr. Urrea has outdone himself this time writing about Nayeli, the wonderful heroine who sets out on a monumental quest from her small southern Mexican town to America. Humor is woven from start to finish into a rather harrowing and realistic journey through the rugged and dangerous countryside of Mexico to Tijuana, Mexico from where illegal passage into the U.S. is planned. I was reminded of Don Quixote and longed for the success of the adventure of Nayeli and her unique companions.

Once they reach Tijuana, the author’s deep knowledge and love for Tijuana comes through vibrantly. One of the most fascinating depictions is life in the Tijuana dump. The squalor of living conditions is truly harrowing but is balanced by the beauty of human resilience and joy for life of the dump inhabitants.  This is not the story of a group of people seeking and finding the holy grail in America. It is rather the poignant story of a person’s quest to do something for the greater good of her beloved community and coming to America temporarily to achieve that and return to her beloved country.