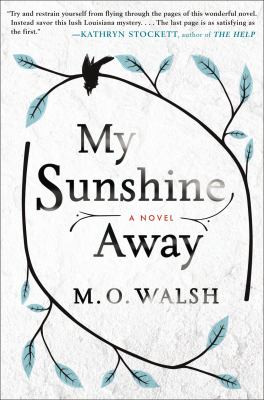 Title: My Sunshine Away

Summary/Review: I really enjoyed this book for a lot of reasons, I have to say the first is because it starts off with the act which is the foundation for the book. There is a rape of a young beautiful girl named Lindy in Baton Rouge, Louisiana. There are 4 suspects, all who live in the same neighborhood just a few houses apart. Bo Kern – a troubled boy, Jason – the adopted son of  psychiatrist, Jacques Landry – who is also a suspect, and the narrator of the book – who is my favorite character, and you never find out his name.

The story spans over 20 years, from the late 80’s until 2007. The author does a great job of sharing with us how each of the characters evolved over those years – the choices they made, some good and some bad. For some who read this it will feel like a walk down memory lane, from middle school all the way through college, and settling down and starting a family of their own.

There is a lot of sadness in this book, but the twist at the end really ties it all together. If you like coming of age stories, with good times and bad you will enjoy this book. There are some chapters that are hard to get through, but you must endure them to get the real feel for these kids and what they went through in their very young lives, and how it changed them forever.

Who will like this book?:  Someone who is interested in a mystery which focuses more on character development than clues and who-dunnit. Someone who won’t shy away from a disturbing topic which has a sweeping effect on an entire community.

If you like this, try this: If you’re looking for mysteries heavy on character development, try Paula Hawkin’s “Girl on the Train” or Garth Stein’s “A Sudden Light”.  If the location of Baton Rouge draws you in, try the mystery series by James Lee Burke.  This is M.O. Walsh’s debut novel, but keep an eye out for more in the works!

If this looks like something you’d like to read, visit the Fairfield Public Library catalog to see if it’s available and/or to place a hold.

Title: Island Beneath the Sea

Summary: Island Beneath the Sea follows a young woman named Zarité thrown into slavery in 18th century Haiti. Known by most as Tété, she is chosen to become housekeeper for Toulouse Valmorain, an unpredictable plantation entrepreneur and his wife, Eugenia, a woman slowly being dissolved into madness by the harsh living conditions and constant threat of political uprisings. The story follows Tété, who is likeable and sweet, but also conflicted and strong, as she struggles to become a free woman while desperately trying to keep her family intact and protect all those who have helped her.

Staying true to her roots, Allende creates an emotional story of romance, politics, and fantasy using an outstanding cast of characters. At times, the book can be a roller coaster- the defeats are particularly harsh and the accomplishments incredibly satisfying, reminding the reader that life is not always just. At approximately 500 pages, be prepared to devote at least a few weeks to the book. The characters -since their relationships are generally unconfirmed and many appear sporadically- take some time to get to know, but it is well worth the effort.

Who will like this book?  Those who like literature and character development- though not as tough as 100 Years of Solitude, a large number of characters come into play, and the book moves rather slowly at times (which is not a particularly bad thing!). Also, those who like reading about exotic places, history, and politics. Similar books would include Honolulu by Alan Brennert and Portrait in Sepia, also by Allende.

If you like this, try this: Honolulu by Alan Brennert, Portrait in Sepia by Isabel Allende, Hummingbird’s Daughter by Luis Alberto Urrea

Summary: In his National Book Critic’s Circle-nominated book What is the What, Dave Eggers deftly told the true story of a Sudanese boy-soldier and refugee as a ‘fictional’ narrative. In his latest, Eggers does the same for the city of New Orleans in the immediate aftermath of Hurricane Katrina. The Zeitouns, Abdulrahman, an immigrant of Syrian descent and his wife Kathy, a native Louisianan, are practicing Muslims who own a successful contracting business. When the storm draws near, Kathy takes their children to higher ground while Zeitoun remains to protect their properties.

Steering his secondhand canoe through the city streets, Zeitoun finds great comfort in assisting where needed while Kathy pleads with him to abandon the city, up until the day he stops calling. The truth behind his disappearance is shocking and life-altering.

Zeitoun manages to feel epic in scope while remaining compulsively readable. In its honest and clear-eyed depiction of the hurricane and its aftermath, it tells a deeply American story about faith, family, the cultural melting pot, devotion to duty, and what it takes to survive when the unthinkable occurs.

When you finish a book as good as this one, you are exhilarated but somehow sad because you can never read it for the first time again. Zeitoun cannot be recommended highly enough.

Who will like this book?: This is a book that deserves a wide readership, but it will particulary appeal to those who like reading stories about ordinary people dealing with extraordinary circumstances.

If you like this, try this: What is the What by Dave Eggers. 1 Dead in Attic: After Katrina by Chris Rose. The Great Deluge by Douglas Brinkley.