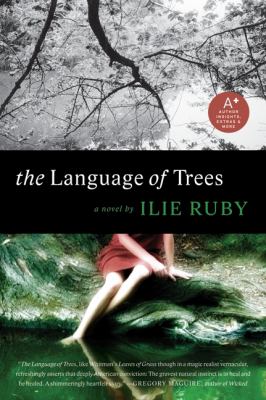 Title: The Language of Trees

Summary: Ilie Ruby’s debut novel opens with a canoeing accident in the waters of the Canandaigua Lake. The three small Ellis children have stolen a canoe and are making their way out to Squaw Island, a few miles away. When a storm springs up, the wind and waves prove to be too much for the children; only two will survive the storm. Twelve years later, the tragedy continues to haunt the residents of Canandaigua figuratively and literally.

Grant Shongo has returned to his family’s cabin on the lake. His wife Susanna left him a year ago and Grant has come back to heal. Back to the place his Seneca ancestors called The Chosen Spot, where the earth split open and his people emerged. Grant isn’t the only one who has been drawn back to Canandaigua. Echo, his first love, has returned from Boston, fearing that Joseph, the man who raised her, is in far worse health than he has let on.

The reunion of Grant and Echo is overshadowed by the disappearance of Melanie Ellis. Melanie has led a troubled life since that night twelve years ago, when she and her brother and sister were caught in the storm so far from shore. Now she is gone without a trace, leaving behind her boyfriend and young child. Some believe she is on yet another binge, but others are not convinced. Either way, her family is determined to find her. It is a perfect storm of sorts, these events that are unfolding. Events that will reveal secrets long kept hidden, a lifetime of secrets and mistakes “that catch up with a person in a span of a few hours”.

This is a great novel with endearing characters that will touch your heart. This is not a novel about regret; instead it is a story of accepting choices made and moving on without regret. It is a story that demonstrates that “not everything is meant to happen. Some things should stay as they are, just like that, full of possibility. It’s wanting them that gives you something to hope for, a reason to get up in the morning and put on a fancy dress”. I loved this novel and its message.

Summary:  There are nine strangers in an Indian visa and passport office who are thrown together when an earthquake hits and leaves them trapped under the rubble. As time passes and there is no communication available to the outside world anxiety rises and tempers flare! After organizing what little provisions they have and securing themselves in the office as well as they can, tensions increase and a young graduate student sizes up the situation and suggests that they all tell a story about an “amazing” thing that has happened in their lifetimes. After initial reluctance and suspicion each character reveals their stories. These stories range from a young Chinese woman who has to flee India during the Sino-Indian War of 1962 leaving her Indian lover and family behind, to a seventy year old accountant orphaned at nine who only found comfort in doing math. Other stories include a young Muslim man struggling with America’s prejudice after 9/11, a rebellious teenager who discovers the gift and healing of music and a woman whose entire view of life changes after glimpsing a display of affection between an elderly couple.

These stories bring the characters to life and also give many different pictures of India. Divakaruni’s writing is beautiful and you can hardly wait for her to get to the next story. A novel about nine people trapped in the rubble of an earthquake would have been compelling enough but the author raises the bar by making these characters jump off the page with their “amazing” stories. This is a fast read that you will not be able to put down until you get to the last page!

Who will like this book? Fans of historical and contemporary fiction.

Summary: In his National Book Critic’s Circle-nominated book What is the What, Dave Eggers deftly told the true story of a Sudanese boy-soldier and refugee as a ‘fictional’ narrative. In his latest, Eggers does the same for the city of New Orleans in the immediate aftermath of Hurricane Katrina. The Zeitouns, Abdulrahman, an immigrant of Syrian descent and his wife Kathy, a native Louisianan, are practicing Muslims who own a successful contracting business. When the storm draws near, Kathy takes their children to higher ground while Zeitoun remains to protect their properties.

Steering his secondhand canoe through the city streets, Zeitoun finds great comfort in assisting where needed while Kathy pleads with him to abandon the city, up until the day he stops calling. The truth behind his disappearance is shocking and life-altering.

Zeitoun manages to feel epic in scope while remaining compulsively readable. In its honest and clear-eyed depiction of the hurricane and its aftermath, it tells a deeply American story about faith, family, the cultural melting pot, devotion to duty, and what it takes to survive when the unthinkable occurs.

When you finish a book as good as this one, you are exhilarated but somehow sad because you can never read it for the first time again. Zeitoun cannot be recommended highly enough.

Who will like this book?: This is a book that deserves a wide readership, but it will particulary appeal to those who like reading stories about ordinary people dealing with extraordinary circumstances.

If you like this, try this: What is the What by Dave Eggers. 1 Dead in Attic: After Katrina by Chris Rose. The Great Deluge by Douglas Brinkley.

Title: The Survivor’s Club: The Secrets and Science That Could Save Your Life

Summary: Ben Sherwood, a fiction author (The Man Who Ate the 747) hits a home run with this piece of general non-fiction. He asks a very simple, engrossing question: Who survives when the unthinkable occurs? When you fall off a cruise ship in shark infested waters or your plane crashes and goes on fire? When a jar of acid is dropped on your head or a knitting needle gets lodged in your heart? When a mountain lion attacks or you contract a flesh-eating virus?  Why do some people survive (and thrive) when most others would succumb?

Sherwood spends equal time discussing the science of these scenarios with experts and talking with the unforgettable survivors themselves. It is a fast-paced read suitable for everybody, and is a book you will likely want to own. Or at least, take notes on!

Who will like this book?: It’s hard to think of who wouldn’t like this book – but it is especially good for fans of survival stories and people who like to be really, really prepared for everything.

If you like this, try this: Just in Case: How to be Self-Sufficient When the Unexpected Happens by Kathy Harrison. Brain Rules by John Medina.