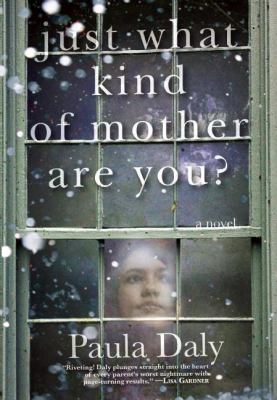 Title: Just What Kind of Mother Are You?

Summary/Review: The words that no woman ever wants to hear. “Just what kind of mother are you?” Lisa Kallisto is sure people are asking that question of her. She has been asking that same question of herself ever since her 13 year old daughter’s friend, Lucinda, went missing. You see, Sally’s friend was supposed to be sleeping over Lisa’s house to work on a school project with Sally. When Sally got sick, the sleepover was cancelled but someone forgot to tell Lucinda or her mother Kate. No one even knows she’s gone until the next morning when Sally doesn’t see Lucinda at the bus stop and calls her to ask about the project.

Lisa knows she doesn’t have it all together-not like Lucinda’s mother, Kate Riverton, anyway. Kate has always been more of a hands-on parent than Lisa could ever hope to be. Now their differences couldn’t be more glaring. One little misstep and a young girl is gone. Overwhelmed with guilt, Lisa promises Kate that she will find Lucinda. As family secrets are exposed and another girl is abducted, it becomes obvious how little everyone knows about their neighbors, friends, and even their own families.

This was a fantastic story. If I didn’t have to break for sleep, I would have read it cover to cover. This debut novel has it all-great writing, setting, and story, and engaging characters, some of whom I would love to see again.

Who will like this book?: Someone looking for a gripping, non-stop mystery thriller.

If you like this, try this: This is a debut novel, but be on the lookout for more Paula Daly coming soon after this success (it was named as one of Publisher Weekly’s top 10 Fall Thrillers!). If you’re looking for a gripping thriller featuring women, try Gillian Flynn’s super-popular “Gone Girl” or the author Heather Gudenkauf.

Does this look like your type of read?  Visit the Fairfield Public Library catalog to see if it’s available and/or place a hold.

Summary: Writer Octavia Frost and her son Milo had a game they used to play together when he was a young boy.  He’d ask “have you ever heard the Beatles version of I’ve Been Working on the Railroad?” And she’d say, no, I didn’t know they’d ever recorded that.  He’d respond “they didn’t, it’s on The Nobodies Album.”  So “The Nobodies Album” is an album made up of songs that don’t exist.  It also happens to be the working title of Octavia’s yet-to-be published book, which is made up entirely of the last chapters of all her previous novels, completely rewritten with the purpose of taking her characters in the exact opposite direction she’d originally taken them – a book made up of endings that don’t exist.

It seems that Octavia is a woman who’s trying to bring many things into existence, and trying to change lots of original endings. Octavia’s relationship with her son and her career as a writer are at the top of the list, and the two are woven together brilliantly in this novel.  It is when Octavia’s on her way to deliver the manuscript of “The Nobodies Album” to her publisher that she sees her son’s name displayed in the news crawl in Times Square – Milo, a successful musician, has been accused of murdering his girlfriend.  This is the beginning of her journey back to Milo – they haven’t spoken in four years.  And it’s also the beginning of the reader’s journey through Octavia’s fiction.  The novel is interspersed with the last chapters of her previous books, both the original and the revised endings.  The family drama, the short story and the classic mystery all come together in Parkhurst’s incredibly creative, inventive and unforgettable book.

Summary:  Claire Brodeur lives an idyllic life in Maine with her husband and daughter.  She receives a frantic call from her sister informing her that their mother is very ill.  Claire resolves to return to her childhood home in New York City for one day to assess the situation. Once she returns to New York the reason why Claire abandoned her life and her mother – a famous photographer – is revealed little by little.

The tension mounts nicely throughout the book. In spite of the fact her mother is on her deathbed the story is so well crafted the reader feels real sympathy for the daughter.  In the end, as in life, the relationship is somewhat healed.   Shapiro so clearly writes from her heart that readers may be getting a glimpse of some of her life experience. Also of note: Christina Ricci Productions has optioned the book for a movie and Ricci will be playing Claire.

Who will like this book?:  Readers who don’t always expect constant action but enjoy the slow unravelling of a family secret.

If you like this, try this:  Readers who enjoyed Shapiro’s especially – Family History:  A Novel (2003).

Title:  The Memory of Water

Summary:  The Memory of Water is a story of family bonds that bend but never break. Marnie Maitland and her sister Diana have not seen each other in 10 years. Not since Marnie went off to college in Arizona and didn’t come back. Growing up, the two girls relied on each other after their father left them and their mother started suffering from bouts of mania and depression. Now Marnie is back in South Carolina. Back to her childhood home on the ocean at the request of Diana’s ex-husband Quinn. Quinn is hoping that Marnie can help his son Gil recover from the trauma he suffered in a sailing accident with Diana. Gil hasn’t spoken a word since the accident and Diana refuses to tell anyone what really happened. Diana blames the Maitland curse that their mother told them about over and over again when they were children. It turns out that the Maitland curse is bi-polar disorder, and Diana is struggling with it also.

What Quinn doesn’t realize is that Marnie has stayed away from South Carolina for a very good reason. Once an accomplished sailor, Marnie is now terrified of the water. You see, Diana’s recent sailing accident was not her first. Sixteen years ago Marnie and Diana nearly drowned in a sailing accident that claimed the life of their mother. Marnie cannot remember everything about the accident, just that afterwards, Diana’s love for her turned to hate. Marnie must uncover the truth about both accidents if she can ever help Gil, and heal herself.