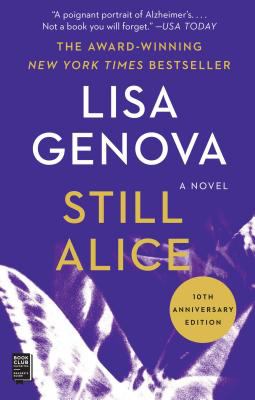 Summary/Review: Alice Howland is a psychology professor at Harvard University with 3 grown children.  First, she can’t find her Blackberry, can’t quite remember names and blames it on stress.  But then one day while she’s jogging, she becomes hopelessly lost and can’t find her way home.  After a visit to a doctor, she’s diagnosed with early-onset Alzheimer’s and her life is changed forever.  But as the disease worsens and steals pieces of what Alice always thought of as herself, she discovers that she is made up of more than just her memories.

Lisa Genova, the author of “Still Alice” holds a Ph.D. in neuroscience from Harvard University.  She wrote the novel, which is her first, for a couple of reasons.   First, while she was in graduate school, her 80-year-old grandmother was diagnosed with Alzheimer’s so she had a personal experience with the disease.  Second, as a scientist, she found that what was happening to her grandmother was fascinating and wanted to know more about it.  Her grandmother was in a pretty advanced stage of the disease, so she couldn’t really talk to her about it.  She knew that she needed to talk to someone for whom the disease was new, so she decided to focus on people who had early-onset Alzheimer’s – someone in their late forties or early fifties.

This dichotomy comes across very clearly while reading Still Alice.  While it is so hard to read about what Alice and her family goes through, it’s fascinating to read about the biology of the disease, how it develops, and some of the things that are being done to help treat people with the disease.  The book review that appeared in Booklist magazine states it best:  “Clearly explaining the testing, treatment options, and symptoms of the disease within the context of an absorbing family drama, Genova has written an ideal primer for anyone touched by Alzheimer’s.”

If you like this, try this:  Lisa Genova has written additional books, including “Loving Anthony” (autistic son dies, two women become friends, husband of one having an affair) and “Left Neglected” (after a car accident, a young woman wakes up with a brain injury called Left Neglect – the brain completely ignores the left side of her body).

If this looks like a book you’re interested in, visit the Fairfield Public Library catalog to check its availability and/or place a hold

This book is a charming little read about an elderly couple who flee across country against the wishes of doctors and family members. It starts off a little roughly but soon the reader is engaged in the adventure of a couple married sixty years who are determined to visit Disneyland one last time. There are no real surprises along the way save for some nice words of sentimental wisdom. Nevertheless I did find myself rather moved. The end of the story has a twist but not altogether unexpected.

Summary: First, thanks to Claudia Silk, our discussion leader of the Woods Book Group, for choosing this title because I don’t think I would have picked it up otherwise.  How did I miss it when it first came out?!?

Madonnas of Leningradis the story of Marina Buriakov and the memories that make up her lifetime.  In the present day, she is an 82 year old woman, getting ready to take a trip with her family to attend her granddaughter’s wedding, which should be a joyous occasion.  But Marina is slowly sinking into the abyss that is Alzheimer’s disease, making everyday tasks so difficult. And as her present slips away, the memories from her past become quite vivid, pulling her back to relive them. The author does a beautiful job of taking the reader into that time, bringing war-torn Russia to life.  Marina is a docent at the State Hermitage Museum during the siege of Leningrad in the second World War, and it is part of her job to help stow away the priceless treasures of the museum to keep them safe from destruction and theft.  Many workers and their families take refuge in the building’s basement, and to pass the time, Marina and a fellow worker walk through the empty rooms, creating a “memory palace,” envisioning the canvases that once occupied the now-empty frames.

This debut novel by Debra Dean is a work of art itself.  Beautiful and poignant, it reminds us that our memories truly are treasures. For more on Madonnas of Leningrad, listen to our podcast of Debra Dean’s call in to the Woods Book Club.

Who will like this book?:  Anyone with an interest in art history, World War II fiction, and/or family drama.

If you like this, try this:  Remembering the Bonesby Frances Itani.  The Siege by Helen Dumore.