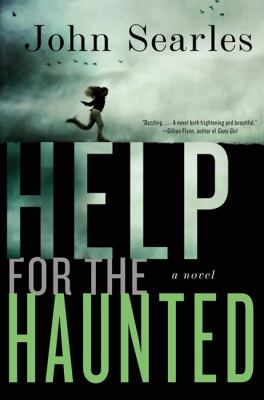 Title: Help for the Haunted

Summary/Review: Since I am not a fan of ghost stories, I was reluctant to read a book titled “Help for the Haunted” for worry that I would not sleep afterward, but I wanted to conquer my fear of the unknown. Although this book focuses on the paranormal, it becomes clear that you see what you want to see and believe what you chose to believe.

The Masons are quite successful in taming the unusual behavior of those possessed by spirits but are incapable of handling and helping their disobedient older daughter, Rose. When they agree to drive during a snowstorm to meet her in a church to talk, they do not know this encounter will end their lives. As their younger daughter, Sylvie, awaits their return to their car, she ends up being the only witness to the murderer. As Sylvie struggles with the past and present she starts putting together the pieces of her parents’ work and the events preceding their murder, which eventually lead her to the person who pulled the trigger.

“Help for the Haunted” is a good choice for book groups as it features interesting characters, including an evil doll named Penny, and provides several topics for discussion.

Who will like this book: Anyone who enjoys reading about mysteries with dark family secrets.

If you like this, try this: “The Returned” by Jason Mott

Summary/Review: “Help for the Haunted” is the story of two girls – Rose and Sylvie Mason – whose parents were helpers of the haunted (I kept thinking of the Warrens throughout).  Sylvie is the “good one”, always responsible.  She plays counterpart to her older sister Rose, whose bad temper, negative attitude, and overall rebellious behavior put a deep strain on the family.  When Sylvie’s parents drag her out of bed to drive to a church to meet Rose, who has left the house angry, she is awakened by gunshots only to find her parents dead in the church.  But what happened?  Who would have killed them?  Why did Sylvie tell the police she knew exactly who it was? And who is keeping the light on in the basement, waiting for her parents’ return?

I started this book, unfortunately, late one night while I was home alone.  What was I thinking?  The first half is extra creepy, laying the foundation for why the Masons became involved with people like Lynch (who Sylvie points to as her parents’ killer) and their pasts.  The book focuses on 14-year old Sylvie throughout, and the second half deals more with her sister, their relationship and past, and her desperation to find the real killer.  I found the book compelling and wanted to know, exactly, what happened to her parents and why.  While the ending didn’t come together as well as it could have (it’s clear Searles is an extremely talented writer, who I will definitely read again), I was pleased to find I was surprised at the unexpected finale.

Who will like this book? : Someone who’s not afraid of a little creepiness.  The book comes out in September and would make an awesome Halloween read.

If this looks like the type of book you’d like to read when it’s released, visit the Fairfield Public Library catalog to check availability and place a hold!