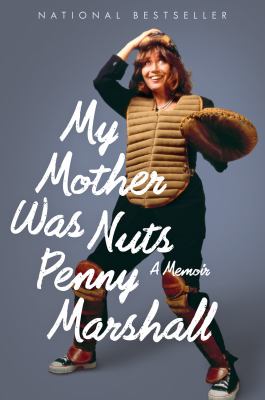 Title: My Mother Was Nuts: A Memoir

Summary/Review: Penny Marshall reminisces about growing up in the Bronx, where she spent most of her time in her mother’s dance studio. She talks about her accidental introduction into acting and her later transition into directing. Her brother Garry may have initially opened the door for her, but Penny’s dedication and talent secured her place in Hollywood. Best known for her role on Laverne & Shirley and as director of Big and A League of Their Own, Penny gets up close and personal on her first marriage and entrance into motherhood, her second marriage to Rob Reiner, and relationship with Art Garfunkel (who knew?!). Surrounded by famous friends (Carrie Fisher and John Belushi–to name a few), Penny offers up many private and often humorous moments.

I loved that the audio book was performed by Penny Marshall, however, I wish she did less “reading her book” and more “telling her story”.

Who will like this book: : In addition to Laverne & Shirley fans, anyone with an interest in Hollywood stars or the seventies/eighties would enjoy this book.

If you like this, try this: My Happy Days in Hollywood by Garry Marshall or Bossypants by Tina Fey.

To see if this book is available, visit the Fairfield Public Library catalog.  We have it available in both audio and print!