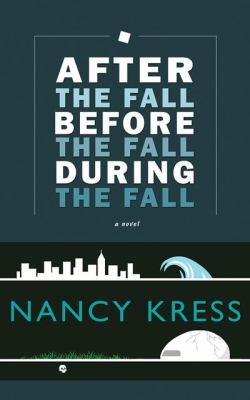 Title: After the Fall, Before the Fall, During the Fall

Summary/Review: In 2035, the Earth as we know it is no more. An alien attack by the mysterious ‘Tesslies’ has devastated the planet, transforming it into a poisoned wasteland.  A small band of humans have been culled to survive in The Shell, a futuristic shelter installed on the Earth’s damaged surface by the aliens. Damaged by radiation, the survivors are desperate to reproduce, thrive and restart the human race. In 2013, a brilliant statistician working for the FBI is trying to connect the dots between seemingly random kidnappings of young children and bizarre robberies occurring all over the East coast. All the cases, witnesses insist, end in a bright flash of light and the disappearance of the assailant and whatever they were taking. And in 2014, an undetected bacterium is slowly attacking plant life all over the planet.

Nancy Kress is an award-winning science fiction force and this book is a great introduction to her work. Told in the voices of Julie, the FBI analyst and Pete, a teenager born in the Shell, After the Fall, Before the Fall, During the Fall weaves together three separate timelines that tell the story of the end of the world as we knew it.

Who will like this book? This short novel is a great choice for fans of dystopian fiction and ecological non-fiction. It is suitable for both adults and older teen readers. And with a surprising twist at the end, it’s not as bleak as it sounds.

If you like this, try this: “The World Without Us” by Alan Weisman. “Eternity Road” by Jack McDevitt. “Life as We Knew It” by Susan Beth Pfeffer.

If you think you would like this book, visit the Fairfield Public Library catalog to see if it’s available and/or place a hold!  [Link will open in a new window]