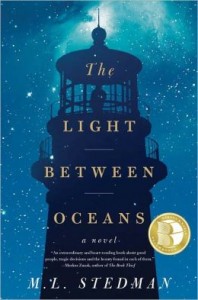 Summary/Review: After surviving four years of war on the Western Front, Tom Sherbourne returns to Australia and takes a position as lighthouse keeper on Janus Rock. Although the island is completely isolated, a half-day’s journey from the coast, Tom begins to find peace after years at war. On his first shore leave he meets Isabel, a bold young woman full of life and joy. As the two fall in love and she agrees to marry him they both envision a life of beauty and adventure in the lighthouse. Years later, after the hardship of living in isolation and after repeated miscarriages and a still birth Isabel is no longer the joyful woman Tom married. Then one day a boat washes to shore carrying a dead man and a living baby, and Tom and Isabel make a decision that will carry repercussions for years to come. In their years of isolation and hardship they’ve lost sight of the lives they effect on the mainland.

This was one of the best books I’ve read in a long time. The story is rich with emotions and you will feel yourself getting pulled in to their story. Would you make the same decisions? And once made would you stick to them no matter what? Tom is torn between what he knows is right and wanting to make Isabel happy after her years of heartbreak. Most stories have a clear picture of right and wrong and the characters you are pulling for. Although there is heartbreak in this story the resolution is honest and real.

Who will like this book? Anyone who enjoys historical fiction or is just looking for the best book written this year.

If you like this, try this: If you were pulled in by the intense plot, “The Snow Child” by Eowyn Ivey deals with a couple facing a very similar issue. If you were more drawn to the writing, this is M.L. Stedman’s debut but keep an eye out for more from her in the future!

If this looks like a book you would like to try, visit the Fairfield Public Library catalog to see if it’s available or place a hold! [Link will open in a new window]

Title: People of the Book

Summary: This intriguing book by Pulitzer Prize winner Brooks (March, Year of Wonders) follows the imagined path of the Sarajevo Haggadah, a priceless illuminated manuscript that was miraculously saved during the bloody conflicts of the 1990s. Hanna Heath, a temperamental and talented Aussie book conservator, is called in to restore the book in time for an exhibit at the rebuilt National Library of Bosnia.

As she examines the book, she begins to find the clues that will lead her to uncover the amazing travels of the haggadah backwards from World War II Sarajevo to fin de siecle Vienna to it’s creation right before the Spanish Inquisition. Brooks alternates Hanna’s own journey of self-discovery with chapters told in the voices of the people who protected, defaced, and crafted the haggadah. It is for these historical chapters that this book is recommended: In them, we learn that a book is no simple thing.

Who will like this book?: People who like historical fiction with a bit of a mystery twist. Book nerds and bibliophiles.

If you like this, try this: Another book with a similar backwards-through-time feel is Girl in Hyacinth Blue by Susan Vreeland. For more on the history of books and libraries, read the masterful Library: An Unquiet History by Matthew Battles.