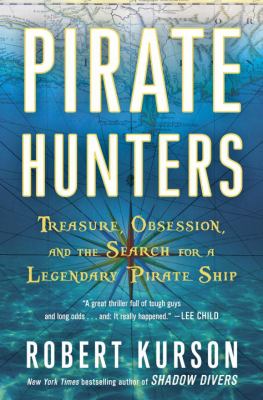 Summary/Review: This is the second book written by Robert Kurson about underwater treasure-hunting and salvage. His first, “Shadow Divers” was about the discovery of a World War II German submarine off the coast of New Jersey. It brought the reader into the dangerous and dramatic world of deep water scuba diving and the strange group of characters who made this exploration an important part of their lives.

“Pirate Hunters”, while an interesting read, is not nearly as tense or dramatic. It deals with the author and some of his treasure-obsessed associates locating a pirate ship from the Golden Age of Caribbean piracy in the 18th century. Apparently pirate ships are the Holy Grail of treasure hunters since so few have ever been salvaged. We read about the false information and myths surrounding the wrecks and the emotional roller coaster of locating artifacts that might lead to a major discovery, only to actually lead to dead ends.

Since these salvage excursions are strictly self-financed, it is seems strange that we are asked to go along with the author’s assertion that the divers are not interested in treasure this time out, but rather in making history by locating a sunken piece of that history, simply because the history of this time period is so important.

Some of the most interesting chapters deal with the background of his crew. They have varied and very colorful backgrounds, such as being involved with the Gambino crime family in New York, then becoming a police detective and then becoming an international private security expert. Each individual attacks the research surrounding underwater wrecks in his own, sometimes very peculiar way.

I enjoyed the book, but it was not the fast-paced, danger-around-every-underwater-corner that I came to expect from “Shadow Divers”.

Who will like this book?: Someone looking for a suspenseful non-fiction book about a topic that hasn’t been written about very often.

If you like this, try this: “Shadow Divers” by Robert Kurson.  Or try “Dead Wake” by Erik Larson, which has a similar feel about the Lusitania.

If this looks like something you’d like to try, visit the Fairfield Public Library catalog to see if it’s available and/or to place a hold!