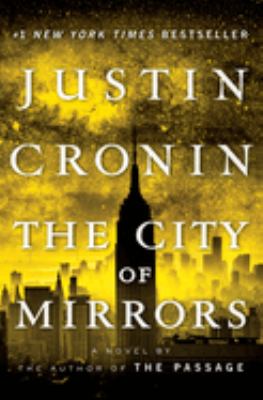 Title:  THE CITY OF MIRRORS

Summary/Review: City of Mirrors is the riveting conclusion to Justin Cronin’s post-apocalyptic series The Passage.

The series starts (with The Passage, 2010) in the not too distance future. The environment continues to deteriorate.  The storms that hit after Katrina demolish New Orleans and turn the Gulf area into a toxic stew.  War is a constant and terror cells continue to multiple.   Given the circumstances, Project Noah seemed like a good idea.  What country wouldn’t want a soldier who can recover from a life threatening wound within half a day?  A soldier with super human strength and speed.  A soldier who could live for hundreds of years.  As it’s explained to Agent Wolgast, the lucky man assigned to collect the twelve “volunteers” for the project : “Let’s say a soldier … takes a piece of shrapnel.  Maybe he bleeds to death.  If he’s lucky, we patch him up.  He’s probably out of the war.  He’s a broken asset.  All the money we’ve spent on his training is a total loss.”   And we can’t have that. So science and the military team up and launch Project Noah.  It was a project that went horribly wrong.

But it was successful in creating beings of super human strength with a thirst for blood that also had an uncanny ability to insert themselves into the dreams of the survivors, draining them of all hope. Unfortunately they could not be controlled.  Given the raw material the scientists had to work with (murderers and rapists all) lack of control quickly spiraled into a blood bath for humanity.

When it all fell apart and the project was questioned by the top brass : “You decided to reengineer an ancient virus that would transform a dozen death row inmates into indestructible monsters who live on blood, and you didn’t think to tell anybody about this?” it was hard to remember the potential.

The most horrifying element of the Project would prove to be the greatest hope for the survival of mankind. A young girl, Amy NLN, the Girl from Nowhere was also injected with a form of the virus.  The effects on the child are far different from the effects on The Twelve and will not be truly realized or understood for years.

The virals, jumps, smokes , dracs, whatever you chose to call them, moved rapidly across the United States destroying or converting anyone unlucky enough to be in their path. The survivors retreat to protected communities and do not go out at night.  To wish upon a star is a long forgotten myth.

The City of Mirrors picks up at a slightly more optimistic time. The events transcribed in The Twelve resulted in the destruction of eleven of the original virals, and those that they turned. Slowly the remnants of humanity leave their protected communities and begin to repopulate the land.  But Zero, the first and most powerful of the virals remains,dwelling in the ruins of New York.  Some of the characters introduced in The Passage, Peter, Michael, Alicia of the Blades (who, as you might guess from the name has killed  more than a few of the virals) and Amy, the Girl from Nowhere return in the City of Mirrors.  It’s Amy, the light to Zero’s dark, who will be the ultimate defender of mankind.

In this conclusion to the trilogy we learn the back story of the search for the virus. Love and betrayal are the powerful motivators behind the actions of both human and viral.  Cronin writes on a majestic scale of acts of great courage and selflessness but also of the horrors that humans will inflict on each other to ensure their own survival.

Be on the look-out for the movie version. Ridley Scott’s Scott Free Productions purchased the movie rights to The Passage but a release date is not yet determined.

Who will like this book: Anyone who enjoys a riveting End of the World As We Know It saga with characters battling against seemingly unbeatable odds.

If you like this, try this: Stephen King’s The Stand; The Strain trilogy by Guillermo del Toro; Swan Song by Robert McCammon.

If you want to place a hold on this book, please click here.