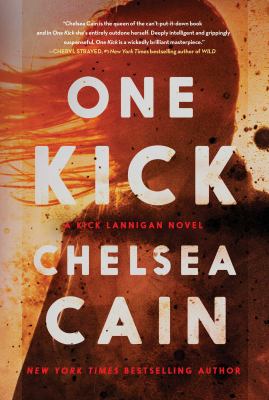 Summary/Review: This book is a first in yet another series! (I know,  it’s hard to commit to a series since there is so many good books out there.)  But believe me –  if you like strong characters and fast-paced action then this is the book for you.

The main character is a strong willed 21 year old named Kick Lannigan. She was kidnapped at age 6 by a man named Mel, who was into child pornography and children trafficking.  She is rescued by the FBI at the age of 11. One FBI agent in particular, Frank, has become her guardian angel of sorts. Kick’s life after the kidnapping did not go well. Her parents divorced and her mother made a lot of money exploiting Kick. At the age of 21 she gets involved in a series of child kidnappings that hit very close to home.

Her abductor, Mel, is in jail and dying of Kidney failure. He knows something about the person who is taking these kids. She decides to confront him to try to get information.  A mysterious man named Bishop shows up and demands Kick’s help. She doesn’t trust him or – anyone for that matter. She agrees because of the boy Adam and the girl Mia whom they are looking for. Without giving too much away, it’s a roller coaster ride  to the very end.

Who will like this book? : Anyone who has read Chelsea Cain before, or someone who doesn’t  mind graphic details and some very disturbing contents. She does write it so well that you really don’t feel offended by it.

If you like this, try this: If you like this book I recommend reading her series with Archie Sheridan and Gretchen Lowe    In order by title: Heatsick, Sweetheart, Evil At Heart, The Night Season, Kill You Twice and Let Me go.

If you think this is something you’d like to read, visit the Fairfield Public Library catalog to see if it’s available and/or to place a hold