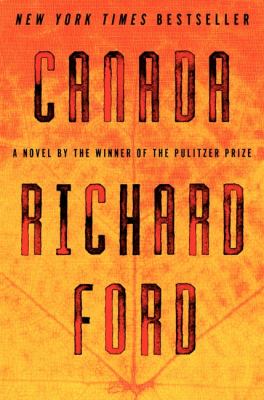 Summary/Review:  Dell (the narrator) and Berner Parsons are ordinary fifteen year old twins living a somewhat isolated life with their parents in Montana circa 1956.  Their father has failed at a number of ventures in his life but has oddly always envisioned himself as a successful bank robber.   So being a little short on money, he decides to carry out a plan and takes their mother along as his accomplice.  They are undetected for a little while, but one day the police finally come and take the parents away to jail, leaving the brother and sister to fend for themselves.  Mrs. Parsons, fearing they would be caught had arranged for a friend to look after the kids, but by the time she shows up, Berner has left for California on her own.  So she drives Dell to Canada to be taken in by her brother.  The brother turns out to be not at all what he first appears to be and when the reasons he is in Canada become evident it provides a twist in the story. Amazingly, Dell never assigns blame or feels anger and continues to believe that both his parents, though misguided, did truly love him and his sister. What happens in this novel is very unpredictable and leaves you wanting to read more to see what finally happens.  There is some foreshadowing as Dell alludes to events which he has not yet related, but you don’t see how can occur until they unfold. The themes of crossing all sorts of boundaries and the force and effect of corrupt acts make this a thought provoking and absorbing read.

Who will like this book:  Someone who likes thought provoking fiction.

If you would like to see if this book is available or place a hold, visit the Fairfield Public Library catalog [Link will open in a new window]