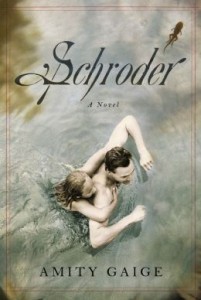 Summary/Review: Erik Schroder is writing a letter to his estranged wife. It is an apology and an explanation as to why he felt compelled to kidnap their daughter. Writing from the correctional facility from which he awaits trial, Erik recounts his life and the choices he’s made that have brought him to this point.

Soon after fleeing East Germany with his father, a young Erik made his first mistake, the ramifications of which were not fully realized until several years later. This lie, his invention of a new name and life history on a summer camp application seemed harmless enough at the time. Out of desperation to leave his German roots and Boston home behind him, Erik Schroder becomes Eric Kennedy. It is as Eric Kennedy, not Erik Schroder that he attends summer camp, goes off to college, falls in love and gets married. It is as Eric Kennedy that he kidnaps his daughter, but it is as Erik Schroder that he now sits in jail.

This is a moving and thought provoking novel that will demand discussion, making it a great choice for book groups. The moral and ethical issues that arise, as well as who may be Erik’s most sympathetic victim, are all fodder for a lively conversation.

Who will like this?: Someone who’s looking for a book that will cause a lively discussion.

If you like this, try this: “My Abandonment” by Peter Rock touches on this subject, though in a very dark way. “Room” by Emma Donoghue shows an alternative viewpoint, of the kidnapped rather than the one kidnapping.

Visit the Fairfield Public Library catalog to see if this book is available, or to place a hold on it! [Link will open in a new window]