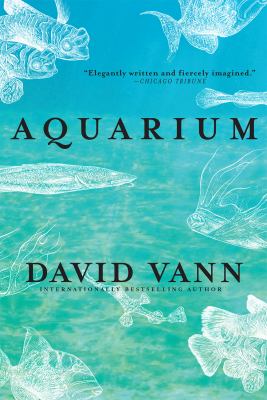 Summary/Review: David Vann is a master of family dysfunction. Hidden within his beautiful writing lurk some of the cruelest and manipulative characters you will ever meet. His newest novel, AQUARIUM, is no exception. This one, however, allows for some hope which isn’t always the case with Vann.

Twelve year old Caitlin lives with her single mother, Sheri, in Seattle. Sheri is struggling as a single mother, working full time while trying to build a good life for herself and her daughter. Since, according to Sheri, they are all alone in the world, Caitlin is left alone for long periods while Sheri is at work. Caitlin is dropped off at school early in the morning and heads to the local aquarium after to school to wait for her ride home. It is at the aquarium that she meets a very kind elderly man who takes an interest in Caitlin and keeps her company while she waits for Sheri to pick her up. When Sheri learns of this friendship, she is consumed with an uncontrollable rage and her haunted past comes roaring back with a vengeance.

Sometimes there’s just no way to tell how damaged a person really is until they are forced to confront the demons from their past.

Who will like this?:  Someone who’s not turned off by dysfunction.  Someone looking for a thrilling read.

If you like this, try this: other David Vann novels, FATHER OF THE RAIN BY Lily King, DROWNED, by Therese Bohman, and DISQUIET by Julia Leigh.

If you think you’d like this book, visit the Fairfield Public Library catalog to see if it’s available and/or to place a hold.

Title: At the Water’s Edge

It’s the height of WWII in Europe as Maddie and Ellis Hyde, along with their friend Hank, travel from Philadelphia to Scotland to find the elusive Loch Ness Monster. Why, you might ask, are they making this dangerous Atlantic crossing? For money, of course. Ellis, unable to serve in the war due to his colorblindness, is already an embarrassment to his colonel father. When Ellis publicly mocks his father during a drunken rant, Ellis and Maddie are cut off financially and unsure what to do next. Without really thinking it through, Ellis decides the best way to get back into his father’s good graces, is to succeed where his father failed. Years ago the colonel tried, and failed, to find the Loch Ness Monster. It turns out the colonel didn’t make any friends over in Scotland during his quest. He did manage to anger quite a few people, though. And that is what Maddie, Ellis, and Hank walk into when they arrive in the village of Drumnadrochit. While Maddie is left alone for days at a time as the men are out monster hunting, she discovers that the life she has been living with Ellis might not be the life she wants to live after all.

This novel is part drama, part romance, and part mystery. Maddie’s reawakening to what is really important in life is the focus of this story, as the monster hunt fades into the background.

If you like this, try this: If you liked Sara Gruen’s writing style, then try her other books – most famous is “Water for Elephants”, but “Ape House” and “Riding Lessons” also gave positive reviews.

This book isn’t published yet, but be on the lookout come June!  How did we review a book that’s not published?  Publishers often donate copies of books for an honest review – like this one!