From Publisher’s Weekly: Auggie Pullman was born with severe facial deformities-no outer ears, eyes in the wrong place, his skin “melted”-and he’s learned to steel himself against the horrified reactions he produces in strangers. Now, after years of homeschooling, his parents have enrolled him in fifth grade. In short chapters told from various first-person perspectives, debut author Palacio sketches his challenging but triumphant year. Though he has some expectedly horrible experiences at school, Auggie has lucked out with the adults in his life-his parents love him unconditionally, and his principal and teachers value kindness over all other qualities. While one bully manages, temporarily, to turn most of Auggie’s classmates against him (Auggie likens this to becoming the human equivalent of “the Cheese Touch,” a clever Diary of a Wimpy Kid reference), good wins out. Few first novels pack more of a punch: it’s a rare story with the power to open eyes-and hearts-to what it’s like to be singled out for a difference you can’t control, when all you want is to be just another face in the crowd. 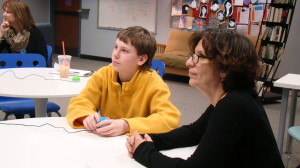