From Publisher’s Weekly: The latest from novelist Foer is a surprising but characteristically brilliant memoir-investigation, boasting an exhaustively-argued account of one man-child’s decade-long struggle with vegetarianism. On the eve of becoming a father, Foer takes all the arguments for and against vegetarianism a neurotic step beyond and, to decide how to feed his coming baby, investigates everything from the intelligence level of our most popular meat providers-cattle, pigs, and poultry-to the specious self-justifications (his own included) for eating some meat products and not others. Foer offers a lighthearted counterpoint to his investigation in doting portraits of his loving grandmother, and her meat-and-potatoes comfort food, leaving him to wrestle with the comparative weight of food’s socio-cultural significance and its economic-moral-political meaning. Without pulling any punches – factory farming is given the full expose treatment – Foer combines an array of facts, astutely-written anecdotes, and his furious, inward-spinning energy to make a personal, highly entertaining take on an increasingly visible (and book-selling) moral question; call it, perhaps, An Omnivore’s Dilemma. 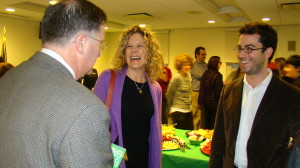 Author Jonathan Safran Foer with guests at a reception in his honor.