From Publisher’s Weekly: Nayeli, the Taqueria worker of Urrea’s fine new novel, is a young woman in the poor but tight-knit coastal Mexican town of Tres Camarones who spends her days serving tacos and helping her feisty aunt Irma get elected as the town’s first female mayor. Abandoned by her father who headed north for work years before, Nayeli is hit with the realization that her hometown is all but abandoned by men, leaving it at the mercy of drug gangsters. So Nayeli hatches an elaborate scheme inspired by The Magnificent Seven: with three friends, she heads north to find seven Mexican men and smuggle them back into Mexico to protect the town. What she discovers along the way, of course, surprises her. Urrea’s poetic sensibility and journalistic eye for detail in painting the Mexican landscape and sociological complexities create vivid, memorable scenes…The colorful characters, strong narrative and humor carry this surprisingly uplifting and very human story. 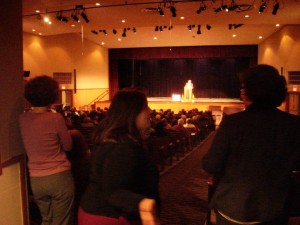 Librarians watch Mr. Urrea speak from the back of the house