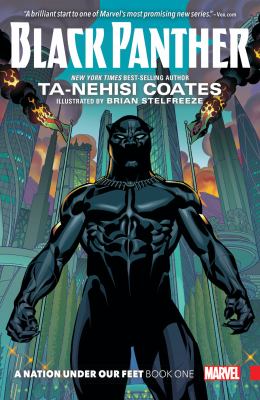 Title: Black Panther: A Nation Under Our Feet Book 1

Summary: Heavy is the head that wears the crown. Upon returning to Wakanda, King T’Challa faces a challenge that he had never anticipated: An uprising of the people. He is not sure if he has the ability to quell the unrest shaking the technologically advanced African nation, and neither are his team of advisors, who are still reeling from the death of T’Challa’s sister Shuri, assassinated while holding the throne on his behalf. With threats both intellectual and supernatural emerging from all corners, including by some disillusioned members of the Dora Milaje, his elite corps of female guards, can T’Challa redeem himself and bring his nation back to a place of peace, prosperity and understanding?

Ta-Nehisi Coates is a fantastic writer known mostly for his non-fiction and essays so it is  thrilling to see him dive into the comic book form. This collection is not a reboot or a reintroduction with an origin story, but it is still a great place for new readers to jump into the Wakandan saga before the release of the Black Panther movie in 2018, as it includes a re-release of the first-ever appearance of T’Challa from 1966.

Who will like this book: Marvel fans, of course. Anyone intrigued by Chadwick Boseman’s performance in Captain America: Civil War.

If you like this, try this: The Ms. Marvel series by G. Willow Wilson. The Hawkeye series by Matt Fraction. The March collection by Rep. John Lewis.