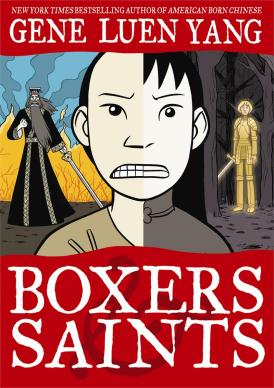 Summary: In this stunning masterwork, Gene Luen Yang tells an epic story across two books about young people facing the devastating consequences of war in 18th century China. Little Bao and Vibiana both live in the idyllic but impoverished rural countryside with families that are facing challenges. Soon, inspired and driven by the hidden magic surrounding them (Bao by the god-kings of Chinese mythology and Vibiana by the legend of Joan of Arc), they each embark on a journey through the rapidly-changing world around them, finding themselves as they endure the upheaval, war and devastation that comes when people with different points of view cannot coexist peacefully. When their paths finally cross, neither will be the same.

It probably doesn’t matter in which order you read these dual narratives, but I’d suggest you start with Boxers. You might not learn too much about this famous colonial-era Rebellion in your history classes, but this story will immerse you in the violent and bloody struggle between those who wished to reject foreign influence in China and others who welcomed it. You will  be moved by both of these young people as they find themselves leading their people towards an unthinkable destiny, each believing they are right.

Who will like this book: Graphic n0vel readers. Fans of historical fiction and stories laced with magic and spirituality.

If you like this, try this: Yang’s Printz-winning work, American Born Chinese. Another fantastic graphic novel with a supernatural element, Anya’s Ghost by Vera Brogsol.For another era in Chinese history, take a look at Revolution is not a Dinner Party by Ying Chang Compestine. For more on the history of this era, read The Boxer Rebellion by Diana Preston.