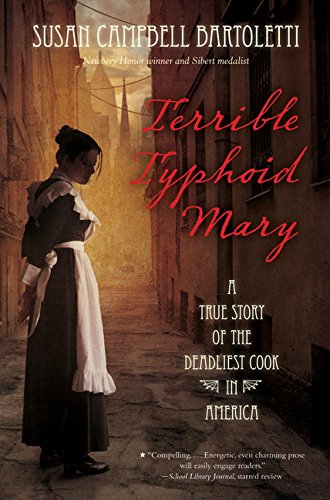 Title: Terrible Typhoid Mary: A True Story of the Deadliest Cook in America

Summary: In turn-of-the-century America, typhoid was a serious and deadly illness. It was spread through unsanitary behaviors such as not properly washing hands or living in close contact with sick people in cramped environments. However, this was before people understood ‘germ theory’ – the idea that microscopic things, invisible to they eye – cause disease. For many people, this was not science, but silliness. Mary Mallon, an Irish immigrant with an impeccable record as a servant and cook employed by rich families in New York City, was a medical marvel: While she carried the typhoid bacteria, she was not herself, visibly ill or suffering from the symptoms of the disease. After several outbreaks in homes she worked in, including some that were fatal, Ms. Mallon was identified as the cause and her life and reputation would never be the same.

This engaging story brings up many interesting questions: Did ‘Typhoid Mary’ understand what she was doing? Was she a villain or a victim? Did she deserve the treatment she received at the hands of authorities? Can science always be trusted? How should we treat people who are ill in our society? Should they share the same rights as healthy people? A true story that echoes through our society to this day, this book will give you chills and make you want to wash your hands, right away.

Who will like this book?: Younger readers who like true stories of science, medicine and illness. People interested in history, especially medical history of the history of New York City. Anyone who likes a story with a secretive main character.

If you like this, try this: Fatal Fever: Tracking Down Typhoid Mary by Gail Jarrow. The Hired Girl by Laura Amy Schlitz. Positive: A Memoir by Paige Rawl.