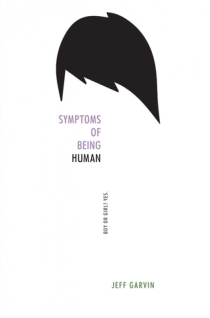 Title: Symptoms of Being Human

Summary: Riley Cavanaugh is starting a new school, in part because of the bullying they endured in private school, and in part because with their dad running for re-election, it just looks better, politics-wise, for Riley to be in a public school. No more uniforms – now Riley gets to choose their own outfits each day. This isn’t as easy as it sounds: Some mornings, Riley feels feminine, and some mornings, masculine and sometimes somewhere in between. Trying to navigate life outside the accepted binary of male vs. female is enough of a struggle when your internal dial always seems to be shifting from one gender to another, but things are even more complicated as a politician’s kid who is expected to participate in the image of the perfect family. Coming out as gender-fluid –  something not many people are prepared to understand or support – is terrifying. Convinced that they will always be an outcast, Riley doesn’t have high hopes for this new situation, but following the advice of their therapist, they create an anonymous blog about life as a gender-fluid teen that soon goes viral. In connecting to other gender-fluid and queer people, Riley begins to find a sense of belonging as they navigate the social scene at school, making friends and enemies in equal measure. But as the reputation-conscious Cavanaugh family gears up for the political season, Riley begins to sense that someone at their school has figured out the truth behind the blog, which threatens to derail not only Riley’s progress, but the outcome of their dad’s election.

This brilliant and necessary story delves into the life of a ordinary teen who happens to be non-binary. It is a book for mature readers: There is an intense scene of violence and its aftermath that is jarring but ultimately necessary, as sadly it is an all-too-common reality in the lives of LGBTQ+ people. What makes reading about Riley an extraordinary experience is the clarity and sensitivity of debut-author Garvin’s writing style. Riley is honest, complex and longing to be accepted, like most people. This is a book and a main character you won’t forget.

Who will like this book?: Anyone interested in learning about gender fluidity. Mature readers of coming-out stories. This is an important book for anyone who considers themselves a LGBTQ+ ally to take a look at.

If you like this, try this: Parrotfish by Ellen Wittlinger. I am J by Cris Beam. Beautiful Music for Ugly Children by Kirstin Cronn-Mills. Almost Perfect by Brian Katcher. None of the Above by I.W. Gregorio.